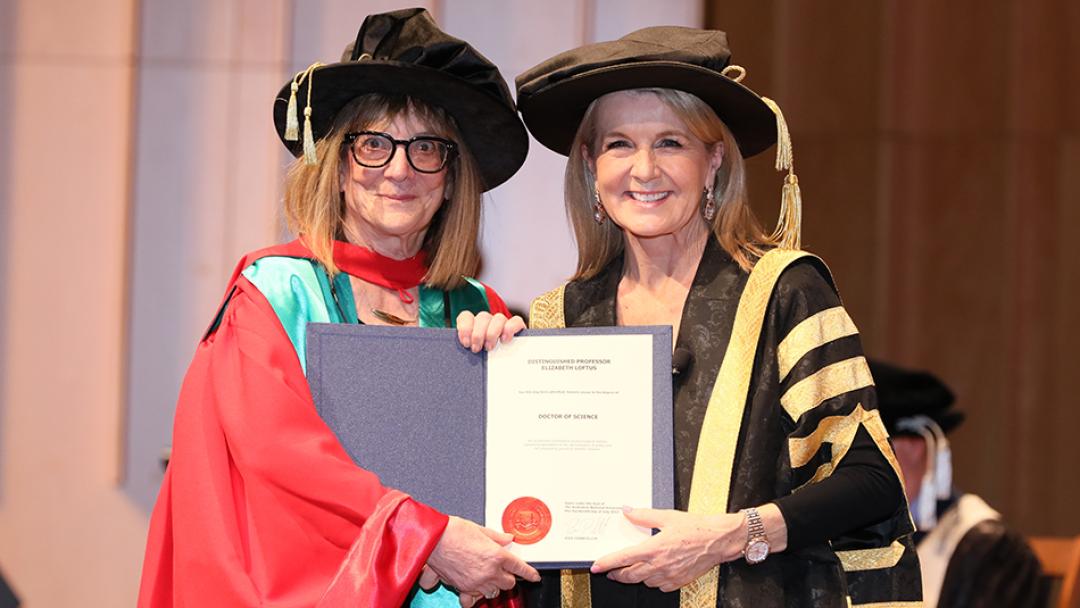 Elizabeth F. Loftus, distinguished professor of psychological science and criminology, law and society, has been awarded her eighth honorary doctorate. On the grounds of her exceptional contribution to psychological science, pioneering applications to the administration of justice and her unwavering pursuit of scientific freedom, Australian National University bestowed the Doctor of Science Honoris Causa during its commencement ceremony last month.

“It was a tremendous honor to realize that the memory research to which I've devoted my life was recognized so far away,” Loftus said. “Particularly special for me is that I was able to visit a former student, Eryn Newman, who is now a new professor at Australian National University.”

As part of the honor, Loftus delivered the keynote address at the university’s recent commencement ceremony. She spoke about bravery. An excerpt:

Some people seem brave by nature; they set out to change the world or pursue justice in the face of relentless opposition; or they run into burning buildings and freezing rivers to rescue a victim. But that’s not the way bravery usually works. What happens for most people, at some unexpected time in their lives, is that they are tested. ... You might not be thinking about bravery or courage, but for many of you there will come a day when you will be faced with a choice you will have to make: integrity vs. convenience, doing the right thing or justifying the wrong thing.  Will you take the brave path and step up, or will you play it safe?  Will you blow the whistle on some unethical practice in your company, risking your job, or will you remain silent?  Some choices must be made instantly, and sometimes you’ll have a bit longer to think about what you want to do. What choice will you make?

I do know that once faced with the choice between yielding to the wave of hostility and criticism that my research provoked or standing as strong as I could for science and justice, the answer was a no-brainer for me. As I look back, I feel pride about the work that I’ve done as a psychological scientist. I’m proud of the fact that I was able to help so many people along the way, particularly when my work has helped prevent innocent people from being found guilty in a court of law. It’s pretty powerful when you know that you have helped to save even one life.

Loftus has been an expert witness or consultant in hundreds of court cases, including the noted McMartin preschool molestation case, the Hillside strangler and Abscam cases, the trial of Oliver North, the trial of the officers accused in the Rodney King beating, the Menendez brothers, the Bosnian War trials in the Hague, the Oklahoma bombing case, and litigation involving Michael Jackson, Martha Stewart, Scooter Libby and the Duke University lacrosse players.

Her seven other honorary doctorates:

Loftus, who also has faculty appointments with UCI’s School of Law and in the Department of Cognitive Sciences, and is a fellow of the Center for the Neurobiology of Learning and Memory, was the founding director of the Center for Psychology and Law.

She earned her undergraduate degree in mathematics and psychology from UCLA, and her Ph.D. in psychology from Stanford University. Her book, “Eyewitness Testimony,” won a National Media Award (Distinguished Contribution) from the American Psychological Foundation. Her other honors and awards are numerous. The following is a partial list: