The third wave of environmental peacebuilding 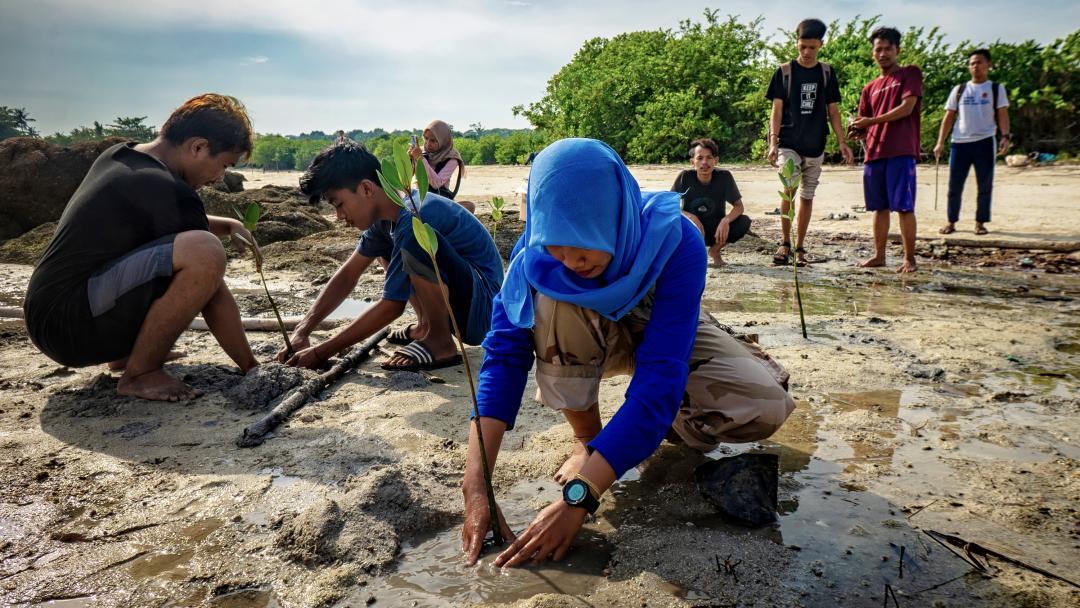 By Richard A. Matthew and Tobias Ide

For most of 2020, news, politics, policy, and research in the United States and abroad were dominated by the challenges posed by COVID-19, a rapidly unfolding global pandemic unprecedented in scale and cost. For much of the world, however, COVID-19 in fact competed with many other highly destructive events including a cascade of environmental disasters. Swarms of locusts pushed much of the Horn of Africa into or close to famine; 30 severe storms including Hurricanes Iota and Eta battered the Atlantic coasts; some 4 million acres of forest burned to the ground in California, doubling the previous high reached in 2018; typhoons ravaged the Philippines; floods overwhelmed parts of Indonesia; and many regions around the world experienced devastating heat waves. In addition to disaster patterns, the trends in violent state conflict were equally alarming, reaching their highest level since the end of World War II, according to a 2020 report on conflict trends from PRIO. In the most violent conflicts, in Syria and Yemen, the impacts of war have been amplified and complicated by the impacts of drought and years of environmental mismanagement.

Future projections provide little basis for optimism about where the world is headed. For example, among the many take-aways in the Ecological Threat Register released in 2020, as many as 1.2 billion people are now highly vulnerable to and could be displaced by climate change impacts in the next few decades. While such projections are fraught with uncertainty, the science informing them is clearer and more worrisome than ever. As the 2019 Global Environment Outlook notes, across the gamut of socioecological systems (atmosphere, land, water, oceans, and biodiversity), we have reached or are closing in on irreversible levels of damage. The next IPCC report on impacts, due to be released in October 2021, will no doubt underscore the rapidly closing window for aggressive climate change action that might preserve an environment aligned with the needs and capabilities of both human and non-human species.

For some thirty years, researchers and practitioners have been studying, discussing, and acting to mitigate the complex interactions between environmental and climate change on the one hand, and human and national security on the other. Focusing on the challenges of, and opportunities for, environmental peacebuilding, a special issue of the journal International Affairs published this month takes stock of the achievements of some three decades of activity, identifies an emerging agenda for an issue that remains of critical importance, and introduces a new and global generation of scholars.

The introduction to the special issue, written by Tobias Ide, Carl Bruch, Alexander Carius, Ken Conca, Geoff Dabelko, Richard Matthew, and Erika Weinthal, reviews the evolution of the field over the past two decades and outlines areas for future work. Initially a response to influential arguments linking war to natural resource scarcity and resource abundance, the first wave of exploratory and conceptual research in the early 2000s suggested a need for conflict sensitive conservation, outlined pathways for conflict resolution and peacemaking via environmental cooperation, and imagined peace parks as a scalable model.

In the mid 2000s, several factors contributed to a larger, second wave of research and practice. In particular, the UN Peacebuilding Commission was established in 2005, and in 2007 the IPCC released its Fourth Assessment Report and the UN Security Council (UNSC) added climate change and security to its agenda. Methodological advances using both ethnographic and large-n data clarified links between environmental cooperation and conflict management, both climate change and intrastate conflict attracted significant research attention, and scholars and practitioners began thinking carefully about legal instruments, resilience building, and the potential risks, exclusions, and simplifications that an environmental peacebuilding agenda might facilitate.

Today, a third wave of research and practice is emerging, multidisciplinary in its methods and far more international in its composition. The special issue showcases research on a range of new topics. For example, much of the focus of the past twenty years has been on integrating the environment into UN peacebuilding activities, encouraging the support of donor countries, attracting the attention of the UNSC and so on—all important steps, but also very clearly top-down approaches to this agenda. There is now a clear and productive interest in what is being done on the ground at the community level. Community engaged research is critical for identifying innovations and best practices, understanding complex security contexts, capturing socioecological nuance, building trust and generating actionable and inclusive science.

The importance of conflict-sensitive programming is also defining this third wave of environmental peacebuilding. Well-intentioned conservation efforts can generate and escalate social conflict. In turn conflict can make conservation difficult. Mechanisms are needed to help address tension and channel conflict at this scale. Today in Colombia, national reconstruction efforts have not adequately incorporated conflict sensitivity into programs in rural areas, allowing concerns about resource grabs to gain momentum, and threatening to reproduce and amplify longstanding socioeconomic rivalries. In contrast, transparent and inclusive tree planting programs in Niger have not only advanced the country’s climate change agenda, but also eased local tensions. Likewise, conflict-sensitive water policies helped to transform competitive into cooperative relations among riparians of the Euphrates and Tigris Rivers during the 2000s.

The risks and opportunities for integrating big data and powerful information technologies into environmental peacebuilding are also emerging as a key feature of this third wave of activity. Visualization technologies can contribute to a shared understanding of environmental challenges, and allow for experimentation with both traditional and innovative interventions and solutions. With broad access to digital technologies, local needs can be more effectively communicated across different scales of governance, monitoring can be more transparent and rapid, and early warning systems are becoming more reliable and inclusive. There are also, however, serious challenges—sophisticated maps and models can suggest a higher level of confidence than is warranted, data collection can be highly intrusive, and communications technologies are vulnerable to many forms of misuse. The need for ethically informed protocols is urgent if these tools are to be used fairly and effectively.

Other issues defining the third wave of environmental peacebuilding include a deeper engagement with its gendered dimensions, and an emphasis on the need to improve monitoring and evaluation systems (including the assessment of existing practices). The evolution of this field has been driven by an expanding and global network of researchers and practitioners, by a tradition of compelling and insistent critique, by a willingness to adopt multidisciplinary and multimethod approaches to understanding, and by an inclusive culture that has recognized and given over leadership to those in the frontlines, and that is inviting dialogue and collaboration with humanitarian, development, and migration experts. Contemporary trends suggest a growing need for environmental peacebuilding in many parts of the planet as environmental conditions deteriorate, people and most non-human species are displaced in their search for water, food, and cooler climates, inequalities deepen, and the drivers of violence increase and converge. A third wave of research and practice is timely, perhaps crucial.