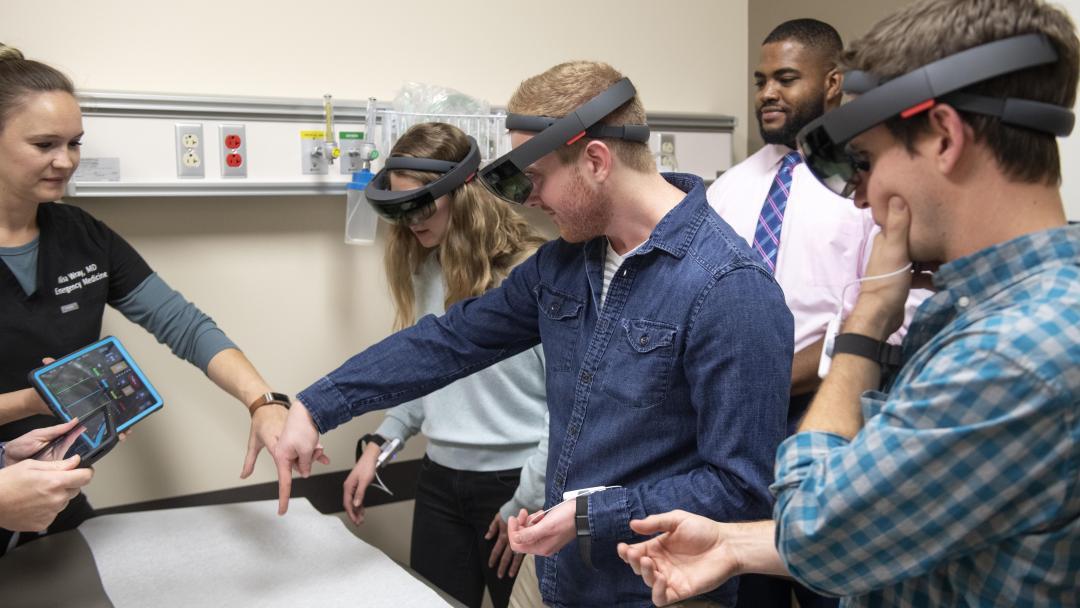 Psychological science students engage in an augmented reality exercise in the simulation lab.

Sarah Pressman, associate professor of psychological science, and fellow researchers are working to identify psychological and physiological effects of augmented reality (AR) prototypes in medical simulation training, thanks to a $1.2 million contract through the Medical Technology Enterprise Consortium.

The contract was awarded to the UCI School of Medicine, in partnership with Chenega Healthcare Services, LLC and MedCognition. Pressman and Drs. Shannon Toohey, Warren Wiechmann, and Megan Osborn from the UCI Department of Emergency Medicine, are leading the research.

The study, being conducted in coordination with the Medical Technology Enterprise Consortium and Chenega Corporation, is critical for assessing the limitations of AR that could impact learning effectiveness in military medical simulation training, according to the researchers.

"Assessing the physiological and psychological effects of AR prototypes for military medical simulations is imperative to the technological development and refinement needed to deliver effective solutions to the combat soldiers," Pressman says.

“We will be using a MedCognition PerSim augmented reality medical simulation trainer to teach medical students about death and dying,” Toohey says. “We will evaluate the psychological and physiological effects of the augmented reality training on the students by measuring salivary cortisol levels, electrodermal activity and evaluating their affective state.”

Augmented reality involves the use of a computer-based simulation that adds digital elements to a live view, rather than providing a complete immersion experience that is found with virtual reality.

The two-year study, titled “Assessment of the Psychological and Physiological Effects of Augmented Reality” (APPEAR), got underway in December, and focuses on whether pre-existing psychological traits or past stress experiences influence the AR medical training experience and moderate the emotional responses to the simulation. Researchers also will evaluate whether the more realistic AR simulation will more successfully illicit realistic emergency situation-related emotional stress as compared to a standard medical simulator, in a medical student population.