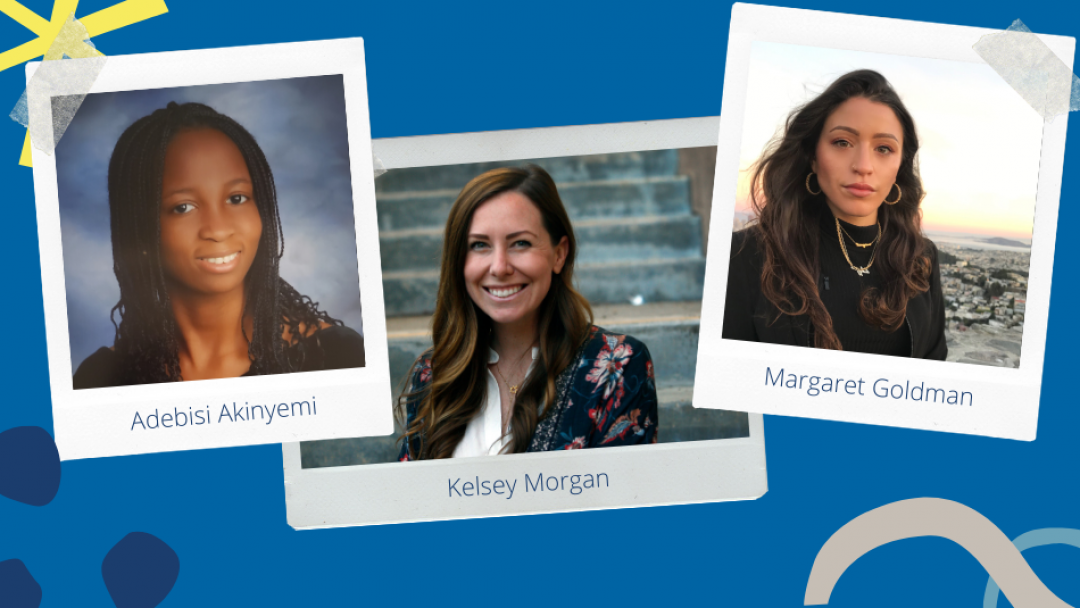 Doctoral students Adebisi Akinyemi, Margaret Goldman and Kelsey Morgan have been named National Science Foundation award recipients. Each NSF scholar will receive a $34,000 stipend plus $12,000 toward the cost of her education per year for three years.

Akinyemi, who has a B.A. in psychology from the University of Texas at Austin, is studying the psychological impact of media exposure to traumatic events on individuals in the general population who share social identities with the victims.

“The homicides of unarmed African Americans by police officers caused outrage among African Americans, shootings at Christchurch mosques in New Zealand inspired fear among Muslims, and coverage of the conditions in which undocumented Mexican immigrants were held in the U.S. shook the Latinx-American community,” she says. “These traumatic events do not affect only those directly involved because advanced technology has enabled these events to be broadcast to the broader public. However, little is known about the psychological effects of media exposure to these events on people who identify with the victims.”

For her dissertation, Akinyemi says she “will examine the psychological impact of media exposure to police violence against unarmed African Americans on African Americans in the general public and assess a mechanism through which their potential adverse responses may be attenuated.”

Her research emphasizes the need for more psychologically sensitive coverage of racially-charged traumatic events due to the psychological harm for which people in the general public who share trauma victims’ social identities may be at risk.

Akinyemi plans to complete her doctorate in psychological science in 2024 and pursue a career in academia.

She says she chose UC Irvine because her program “provides an interdisciplinary and collaborative research environment that contains a wealth of distinguished faculty who conduct traumatic stress research.”

Roxane Cohen Silver, an expert in the field of stress, trauma, and coping, is her advisor. She conducts research in the Silver Stress and Coping Lab.

Goldman, who has a B.A. in psychology from the University of Miami, plans to complete her Ph.D. in criminology, law and society in 2023 and pursue a career in academia.

“I plan to continue pursuing social justice-oriented research that directly benefits the communities with which I work, and to continue bridging my research with my experiences organizing on the ground. One specific goal I have is to build pathways, both material and social, between alternative schools and higher education,” she says.

Alternative schools are not just for high school dropouts, she points out. “Students may be involuntarily referred to these schools, which is in part the impetus for the study (because these referrals disproportionately target students of color).”

Alternative schools “purportedly provide support to students whose needs cannot be met in a traditional school setting,” she explains. “Yet, alternative education environments may predispose youth to contact with the criminal justice system or to dropping out, potentially contributing to the school-prison nexus. At national, statewide and district levels, there exist stark racial disparities in alternative education enrollment, which has implications for disparities in multiple institutions. Research has given little empirical attention to the processes by and contexts under which students of color are disproportionately referred to alternative education.”

Goldman chose to pursue the subject as a result of her experiences organizing with a youth-led activist movement in Los Angeles.

“The organization with which I work is attached to a continuation school, and many of the youth organizers have experienced exclusion from school through referral to alternative education and through suspension/expulsion,” she says. “Their negative experiences being ‘pushed out’ of school, particularly as students of color, and their experiences trying to learn in spite of the lack of resources distributed to alternative schools, motivate my own investment in this subject. And, due to the ostensibly benevolent purpose of alternative schools, racially disproportionate referrals to alternative education, unlike school discipline, may fly under the radar as a mechanism of racial inequality. Better understanding the processes and contexts fueling racial disparities in alternative education is a critical step toward creating an educational landscape that is safe and truly beneficial to students of color.”

For Morgan, who plans to complete her Ph.D. in social ecology in 2023, human trafficking is one of the most important issues facing society today.

“It’s the fastest growing criminal industry,” she says. “There are currently more than 40.3 million victims worldwide. Research on the issue, specifically on effective interventions for survivors of trafficking, are extremely limited.”

She would know. The UCI alumna, who has an undergraduate degree in international studies, is founder and executive director of Willow international, a nonprofit organization that aims to end human trafficking.

In 2011, Morgan was living in Uganda leading an organization providing restorative care services to survivors of human trafficking when she met a trafficking survivor named Lillian.

Before being trafficked, Lillian owned a small printing business in Kampala, Uganda and had been struggling to make ends meet. A woman approached her one day and offered her a job in China where she could make more money in a month than she saw in an entire year. When she arrived in China, her passport and visa were taken from her, she was brutally raped, and then forced into prostitution. By the time she was able to escape, she was suffering from severe PTSD and was pregnant.

“I will never forget the car ride back to our aftercare shelter with Lillian,” Morgan recalls. “She was so grateful to be home and alive. As she shared her story with me, she emphasized how many girls were still suffering in sexual exploitation. ‘There are so many girls there. So so many,’ she cried when she told me. She asked me to help them and on that day in 2011, I promised her that I would do everything in my power to help. I committed myself to ending human trafficking and supporting the recovery and restoration of survivors.”

Morgan plans to use her Ph.D. to advance the field of international human rights.

“UCI’s School of Social Ecology allows students to use science to engage with communities to find practical solutions and interventions to real-world problems,” she says. “I love being a part of a school that encourages this type of work. UCI is also dedicated to translating science so that research findings are accessible to those who can implement interventions and make a real difference.”