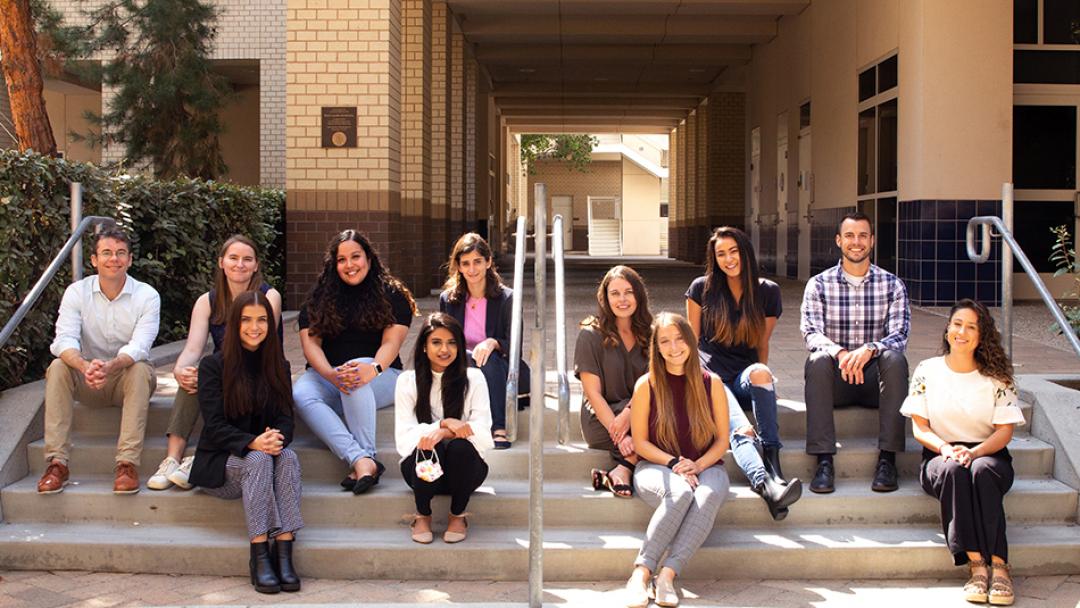 The first students in the new Ph.D. in clinical psychology program have commenced their course of study. Each of the nine students is receiving full funding, plus a stipend and housing for the next five years. They are: Miranda Bridgwater, David Cenkner, Rosa Hernandez-Ramos, Aru Kapoor, Emily Petti, Fatemah Shenasa, Madeline Snyder, Lychee Tran and Kit Wislocki.

“I am excited for my future here at UC Irvine as a member of the first cohort in the Clinical Psychology program,” Snyder said. “To have my education funded by the university is a privilege. Accordingly, I am eager to give back to UCI and the broader Irvine community, applying the knowledge and skills gained from this program. With Dr. Jason Schiffman as our director and Dr. Elizabeth Martin as my mentor, I will receive excellent training, guidance, and support throughout my graduate education and beyond.”

During their first meeting on campus this fall quarter, Schiffman told the graduate students that they will be filling a needed gap in society.

“The students will become leaders, making a difference in the community by connecting science to practice,” Schiffman said “By doing so, they will be making a difference for some of our most vulnerable in really powerful ways. They will help the mental and general health of folks throughout Orange County, California and the world. And, through fellowships or teacher assistantships, the School of Social Ecology and the university are supporting them.”

The School launched the Ph.D. program in clinical psychology in response to growing mental health needs.

According to the Centers for Disease Control and Prevention, there were an estimated 43.4 million adults – about one in five Americans aged 18 or older – with a significant mental health concern in 2015. And, one in five children, have had a seriously debilitating mental health or behavioral health disorder. Half of all chronic mental illness begins by age 14 and three-quarters begin by age 24.

Suicide, the CDC reports, often is associated with symptoms of mental health challenges, and is the 10th leading cause of death in the U.S. and the second leading cause of death among people aged 15-34. Mood disorders, including major depression, dysthymic disorder, and bipolar disorder, are the third most common cause of hospitalization in the United States for youth and adults. People living with serious mental illnesses such as schizophrenia die on average 25 years earlier than others, largely due to treatable medical conditions.

Students will gain from the interdisciplinary orientation of the School of Social Ecology with faculty and programs in UCI’s Schools of Medicine, Public Health, Nursing, Law, Education, Social Sciences, Biological Sciences, Arts, and Engineering, and UCI’s Institute for Clinical and Translational Science and the Institute for Memory Impairment and Neurological Disorders. Training features a partnership with Psychiatry and Human Behavior as well as community mental health agencies.