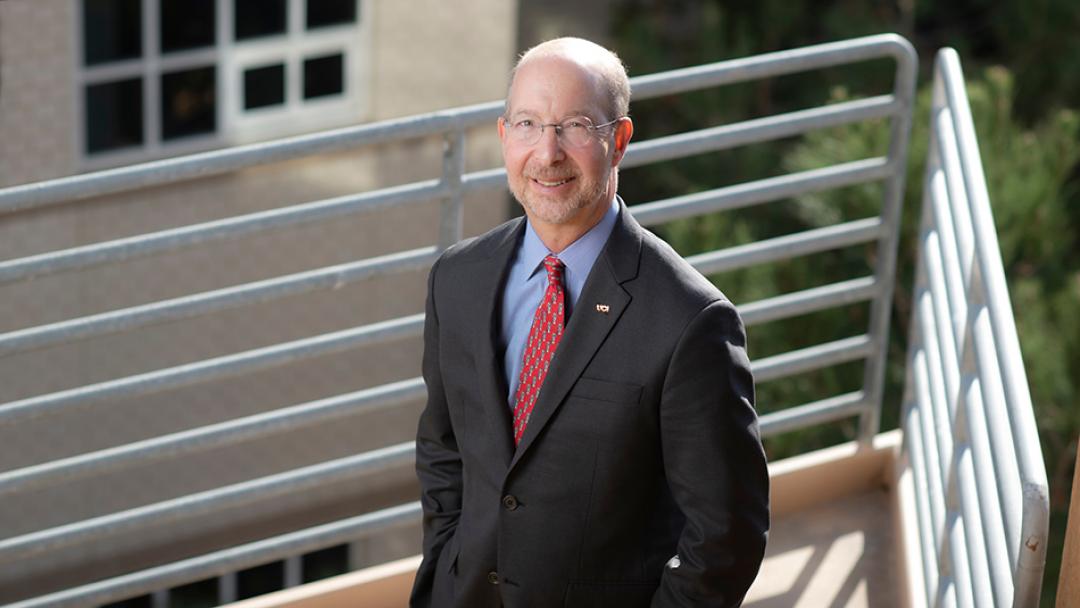 “We don’t just study social problems; we seek to solve them,” says Jon Gould, new dean of the School of Social Ecology. Photo by Steve Zylius

What appealed to Jon Gould about becoming the fifth dean of UCI’s School of Social Ecology since its founding in 1970? Helping explain what exactly social ecology is.

“My vision of academia does not involve writing books that will go on shelves alone. Instead, I want to help people take academic research and insights and put them into practice in ways that improve the world,” he explains. “For as long as I can remember, I’ve been interested in the intersection between research, policy, education and advocacy, and I’ve been fortunate enough to have a career that’s taken me to all of these places.”

Those places include the Washington, D.C., office of Mayer, Brown & Platt, where Gould worked in the litigation and government relations practices; Eastern Europe, where he wrote nonprofit laws for Macedonia; Africa, where he was an elections observer and trained paralegals for rural communities; Albania, where he represented Greek American dissidents at the behest of the U.S. National Security Council; the U.S. Supreme Court, where he was a fellow posted at the Federal Judicial Center; the National Science Foundation, where he was director of the Law & Social Sciences Program; and the U.S. Department of Justice, where he was a senior advisor in the Office of Legal Policy.

Gould, who earned a J.D. at Harvard Law School and an M.P.P. at Harvard’s John F. Kennedy School of Government, began his academic career with a law school teaching fellowship at the University of Chicago as he pursued a Ph.D. in political science. He continued on to George Mason University, where he was an associate professor of criminology, law & society and director of the Center for Justice, Law & Society; American University, where he served as the inaugural director of the Washington Institute for Public Affairs Research and chair of the Department of Justice, Law & Criminology; and Arizona State University, where he was a Foundation Professor in criminology, justice and law and director of the School of Criminology and Criminal Justice. The Western Society of Criminology recently bestowed its Paul Tappan Award on Gould for his outstanding contributions to the field of criminology.

He concedes that UCI’s School of Social Ecology covers “a lot of ground” – from urban planning & public policy to psychological science to criminology, law & society – but finds that the common thread is: “We don’t just study social problems; we seek to solve them.”

Finding solutions to the world’s ills “really requires an interdisciplinary approach, and that’s one of the things the school is known for,” Gould says. “It’s an exciting approach to academia.”

His approach to his first year as dean involves wrapping his head around the UCI culture. To that end, Gould has embarked on a #90in90 challenge to connect with 90 students, faculty members and staff in his first 90 days as dean, posting photos from the encounters on Twitter. The native Chicagoan also posted a photo of himself surfing off the Orange County coast with the caption “Ok @Social_Ecology community, if I can get up on a few waves, you, too, can try something you thought impossible.”

On a more serious note, he says, “I think the school is running quite well, and our faculty are doing extremely good work. We have a diverse student body; we’re placing them well. This is a very strong school I have joined, so job one is to not mess that up.

“But after that, the thing I’m most interested in – and where I think there are growth opportunities for us – is doing an even better job of translating our work outside the walls of academia,” Gould says. “So I’m eager for us to increase our outreach functions, particularly development, communications and grants. We are connecting with more alumni; we are connecting with more of the policy practitioner world. We are driving more interest to the work we’re doing, and we will then, in turn, raise the amount of external support we have for the work we’re doing. So those would be my initial priorities, and I feel both invigorated and fortunate to be in a position to help advance the school.”