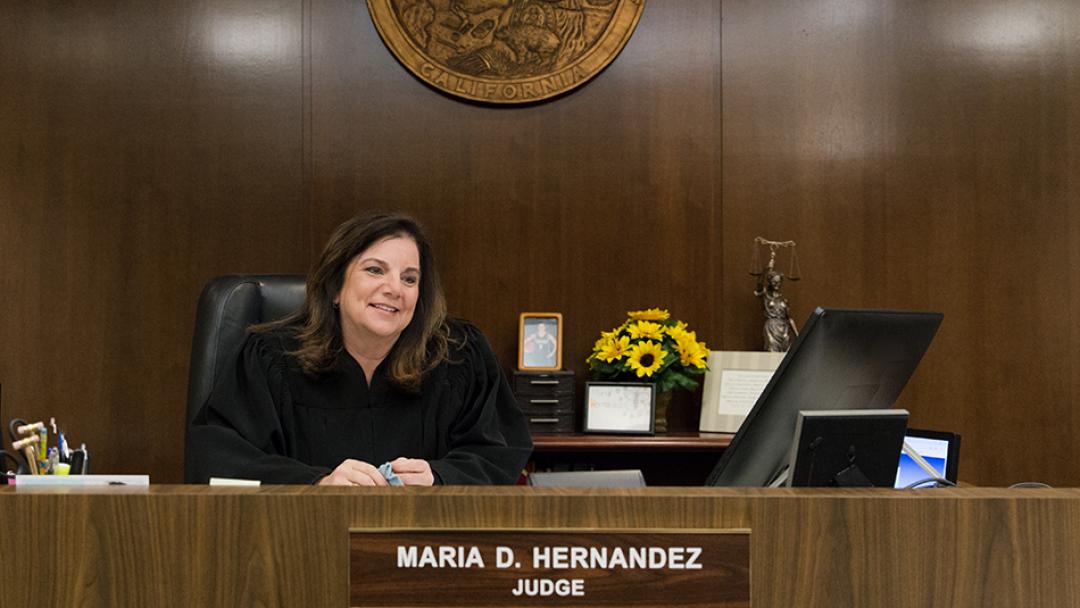 One young man “graduated” to the next phase of Young Adult Court (YAC). In the same afternoon, another was sent to jail for failing to comply with the YAC terms, another provided an update on his job search, another talked about his housing  woes, another expressed his desire to go to school and need for grief counseling and another asked for help with bus fare and food.

All were given words of encouragement, and those who needed it were given directions to a food pantry and instructions on where to go for job coaching, counseling and help finding affordable housing. The one who moved on to the next phase received a round of applause and gift cards to Target and In-N-Out Burger.

"We're going to help and make sure you have the resources you need,” the Orange County YAC judge, UCI alumna Maria D. Hernandez, tells the men. “We want to see you succeed. You keep investing in yourself and you will be successful, and if you’re successful, than our community is successful because you will be a productive member of the community.”

What is Young Adult Court?

YAC is a collaborative court for felony offenders between the ages of 18 and 23, also known as the transition age youth, or TAY, population. Launched in Orange County as a pilot project in August 2018, it is one of few such courts in the country.

With a $780,000 grant from the National Institute of Justice, Cauffman and her team of researchers are evaluating the Orange County YAC, the first to serve randomly chosen offenders, who can have their felony convictions dismissed or reduced upon successful completion of the program. By studying the program over the next three years, Cauffman and her team will be able to produce evidence on whether YAC works.

"We will find out if we do reduce recidivism rates with this program, but we’re going to capture a lot more than that, such as whether participants find stable housing and jobs and whether their mental health improves and substance abuse issues decline,” Hernandez says.

One of the most consequential incentives of participating in the YAC is the reduction of a felony charge to a misdemeanor or the complete dismissal of the felony charge, Hernandez and Cauffman point out.

“It is known that the ‘felon’ label produces a wide variety of collateral consequences (e.g., employment, education, housing, voting),” Cauffman notes. “In California alone, the National Inventory of Collateral Consequences of Conviction estimates that there are nearly 700 collateral consequences attached to a felony conviction (NICCC, 2017). As an example, the threshold for triggering collateral consequences attached to felony theft in California is the difference between stealing property worth at least $950 and property worth $949 or less. Thus, a single dollar can differentiate being denied public housing, employment and educational opportunities for a young adult. The detrimental effects of treating young adult offenders to harsh sanctioning disrupts the acquisition of human and social capital, which can generate substantial inequalities among young adults exposed to the criminal justice system. The damage associated with official sanctioning and collateral consequences for 18- to 25-year-olds is particularly startling when we consider the fact that these individuals have a significant portion of their lives still ahead of them. This is not only important for the youth, but for our community as a whole. If we want these youth to be productive members of our society, we cannot saddle them with a label that limits their opportunities.”

The program, which can take about 18 months, consists of developing a “youth action plan,” which lays out all the steps participants must complete such as attending all court hearings, meeting with probation officers and case managers,
getting substance and/or alcohol abuse treatment, mental health counseling and employment and education advice and following through. The goal is to address and prevent criminal behavior in the future.

Researchers have documented that the brain is continually maturing from childhood into early adulthood. The brain’s frontal lobe — which regulates emotion and impulse control — isn’t fully mature until about age 25. Increased impulsivity among young adults suggests that their criminal conduct is driven less by a cold rational calculus and more by an inability to regulate their own behavior, Cauffman explains.

For example, in a study of more than 1,300 serious felony offenders between the ages of 14 and 17, Cauffman found that about 90 percent stopped offending by the time they turned 25 due to an increase in maturity and self-control.

She notes that it costs more than $100,000 each year to incarcerate one child in a California juvenile detention center. Four kids could be educated in the University of California system for that amount, she says.

Cauffman also has found that longer stays in juvenile facilities do not reduce reoffending. But, “youth who received community-based supervision and aftercare services were more likely to attend school, go to work and avoid further offending during the six months after release, and longer supervision periods increase these benefits,” she says.

Research also shows that those in the TAY population are the biggest offenders, Hernandez points out. “Roughly 10 percent of the general population is this segment, your 18- to 25-year-olds yet, it comprises over a third of the prison population. These young adults are offending and reoffending at a much higher rate than anybody else. So, what can we do to address this problem? We need to try evidence-based practices to reduce recidivism.”

A Community of Support

The Orangewood Foundation case managers along with probation officers follow each participant’s progress and provide resources and guidance so that they can move through the four phases of the program and “graduate.”

“Each phase is individually driven and tailored,” Hernandez explains. “We want each person to be able to set goals and accomplish them, use the resources available and, ultimately, to be self-sufficient and functional. We have multiple agencies working with these young people and we urge them to engage us, and build rapport and trust with their case manager and communicate their needs because we are here to help them succeed. If they succeed, it’s a win-win — for them because they change their life trajectory and for the community because they’ll be law-abiding productive citizens.”

Hernandez, who presided over Orange County Juvenile Court for nine years before taking on YAC, says she is passionate about the program because “it’s the right thing to do.”

She calls her late father, Michael Daghlian, her role model and hero.

“He was a blue collar worker, who owned a gas station and was one of the hardest-working people I’ve ever known. He taught me that no matter what you do, you need to work hard at it and always do right by and stand up for people, especially the vulnerable who aren’t being protected and don’t have a voice.”

He did so as a school board member in San Diego County in the 1970s, Hernandez recalls. “And, education was always emphasized even though he didn’t go to college himself.”

Hernandez, who was born and raised on a farm in Fallbrook, was the first in her family to complete a college degree. She earned her bachelor’s degree in social ecology from UCI in 1986 and her law degree from Western State College of Law in 1991.

Now living in Huntington Beach with her husband Al Hernandez, the mother of four children and grandmother of two, worked as a public defender until she was appointed an Orange County Superior Court Commissioner in 2006, then as a judge by former Gov. Arnold Schwarzenegger in 2009.

As a UCI student, Hernandez was a member of the volleyball team and her education was partially funded by scholarships. During her law school years, she worked as a waitress and a police department dispatch operator.

Grateful for her life’s blessings, she says, it’s her responsibility to serve as a role model to the participants in the YAC program, especially because many of them grew up without role models.

“I use my voice for those who don’t have a voice, for children, victims, families, the vulnerable and marginalized,” Hernandez says. “That’s my purpose.”

Cauffman, one of the country’s leading scholars on juvenile crime and justice, says Hernandez is what every judge should aspire to be.

“Her unwavering commitment to youth, her visionary lens for change and her steadfast commitment to building a better system are what make her an inspiration to all,” she says. “No other judge I have ever worked with is as passionate and committed as Judge Hernandez.”

Their collaboration on the YAC program “epitomizes the science to practice model,” she adds. “Not everyone understands the importance of research to ensure that this program be rigorously evaluated. Judge Hernandez is a true leader. She knows the power of research and believes in building the bridge between science and practice.”