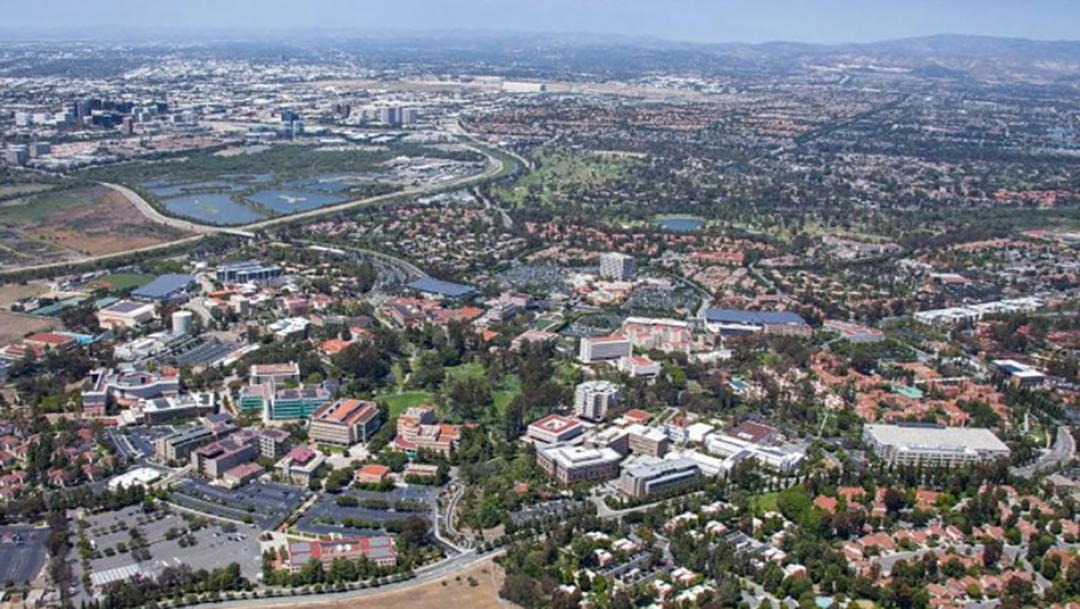 John Hipp and Charis Kubrin found that the city of Irvine has much lower rates of crime than criminologists would predict given its demographic profile, which includes significant population growth and increases in immigration, racial and ethnic diversity, rental housing units and retail businesses. Photo by Ethan Rohloff. Inset photos by Karen Tapia

For 16 straight years, Irvine has been named the safest city of its size in the U.S., based on FBI Uniform Crime Reporting statistics for 18,000 jurisdictions. With the city’s 50th anniversary coming up on Dec. 28, the co-directors of UCI’s Irvine Laboratory for the Study of Space and Crime, John Hipp and Charis Kubrin, decided to learn why that is — despite the municipality’s evolving demographics. The result: a comprehensive, 57-page report titled “Irvine at 50: A Tale of Continuity and Change.”

Kubrin says of the title, “The continuity is the consistently low crime rates that Irvine enjoys. The change includes all the drastic changes that the city has undergone over time: Population size, density and immigration have grown, and the racial and ethnic composition has transformed.”

The numbers over the years initially baffled the research team. By the 2010s, Irvine’s violent crime rate and property crime rate were both one-half to one-third what they were in the 1980s and 1990s — amid significant population growth and increases in racial and ethnic diversity, rental housing units, and retail businesses. These are all characteristics that criminologists typically identify in cities with escalating crime.

One common perception is that less crime is coupled with more police, but that isn’t the case for Irvine. The study found that the number of police per capita in the city has actually decreased over time. “So it’s not a quantity thing, but it may be a quality thing: Maybe the police are doing really good things that help to lower crime,” says Hipp, professor of criminology, law and society as well as urban planning and public policy and sociology.

Mike Hamel, who joined the Irvine Police Department in 1995 and served as chief from 2015 until his retirement three months ago, agrees with Hipp, saying, “In Irvine, the quality of policing may be more related to safety than the quantity of police officers. The department is home to many dedicated and caring police officers.”

With a mission statement that emphasizes “working in partnership with the community,” the Irvine Police Department has implemented several potentially impactful initiatives. These include aggressive messaging about how to deter theft, coordinating with the city to boost security at construction sites, and the addition of a youth liaison officer to identify and work with local at-risk youths. While the study did not measure the results of such efforts, it does conclude that Irvine’s meager crime levels are not due to a large police force.

Another conclusion is that the city has even lower rates of crime than would be predicted given its demographic profile. Even accounting for characteristics associated with decreased crime – such as the presence of highly educated residents, greater income levels and a large concentration of new housing – Irvine’s crime levels are lower than expected. Since 2000, it has experienced 35 to 50 percent less property crime and 50 to 70 percent less violent crime than forecast by the UCI criminologists’ models for a city of its size and makeup.

While the study does not, ultimately, identify the reasons for this, it does eliminate some – in particular an often perpetuated misconception: “What we can say is that immigration does not cause high crime rates in Irvine,” Kubrin says. “As the population became more diversified, crime did not increase right along with it.”

The study suggests trends to watch as Irvine moves into its next 50 years. It’s possible that changing age demographics and needed maintenance to aging housing will impact crime, but only time will tell.

“The real important, key finding,” Hipp says, “is that when you take into account Irvine’s demographic and socioeconomic profile, it should have higher crime rates than it does – which makes its low crime rate particularly impressive.”

Hamel commends Hipp and Kubrin for their “insightful and thought-provoking research,” which, he says, “demonstrates that Irvine is a very unique place.”