Celebrating the passion, dedication and personal stories of Social Ecology faculty, staff, students, alumni and benefactors, “The Dean Asks…” is a feature in which Interim Dean Valerie Jenness interviews people inspired by the pursuit of excellence and encourages participation in interdisciplinary education to solve complex societal problems. Over the next year, please check back to read or listen to additional installments. View Archive 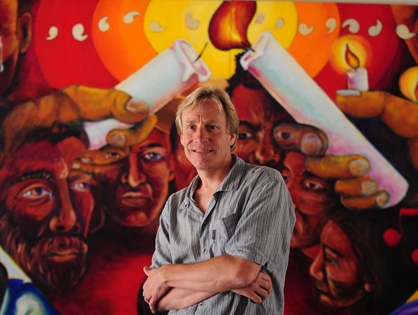 In this inaugural “The Dean Asks…” interview, Interim Dean, Valerie Jenness interviewed Professor John Hipp about his recently released report “The Orange Crush: The Squeezing of Orange County’s Middle Class,” (Read the Report) which reviewed over thirty years of data and identified some important demographic and economic shifts in the county.

Val: What drew you to this topic, the study of demographic and economic changes in Orange County?

Val: What are the basic findings in the report and what does the report conclude?

John: The first finding was the dramatic ethnic changes in Orange County. In 1970, almost 90% of the county was white, but now it is about 50% white. Orange County has transitioned from being one of the most homogeneous counties, as far as race and ethnicity is concerned, to be very mixed. The second important finding was the big rise in the inequality over time in Orange County. In various ways, our numbers showed a hollowing out of the middle class. There has been an increase of wealthy people and an increase in people struggling to get by. We found this by examining the cost of living, specifically home values and rents. These have been appreciating at higher rates than income. When you combine these two findings, it is clear that it is getting more difficult for lower class residents to survive in Orange County.

Val: Are there different trends in Orange County that we typically don’t see across the country?

Val: Based on your research, what are the community consequences and challenges of this economic and educational hollowing out?

John: Many consequences can be identified when looking at the system holistically from an interdisciplinary view, which is important to researchers in the School of Social Ecology. One consequence of the educational hollowing out is a less educated workforce for local employers. Attracting businesses to Orange County that will provide good quality jobs become a challenge when there is a lack of quality employees. Therefore, it has become a reinforcing process of fewer jobs, fewer workers, and fewer companies coming to provide the jobs. Another consequence of this inequality is crime. In other studies I have conducted, I have found that neighborhoods with more inequality see an increase in crime over time. A shift in economic and educational inequality can truly have a negative impact and effect on our community.

Val: What does your report suggest can be done to address the growing economic inequalities and educational differences in Orange County?

John: It is a challenge to address these issues, but solutions can come about when one takes a broad base, or holistic viewpoint of the larger system. Then particular problems can be focused on, such as the lack of affordable housing in Orange County. This issue is possible to solve if individuals have the fortitude to pursue it politically.

Val: What is your definition of the “American Dream”—both personally, as a human being with aspiration of your own, and professionally, as a sociologist and criminologist who studies communities?

John: The idea of the ‘American Dream’ is that everyone can have their own ‘American Dream’. We all have our own particular dream, which I identify as a kind of American rugged individualism. But there’s also this notion of community, and to me, the ‘American Dream’ becomes a part of that. My American Dream might be to live in a nice house and all the comforts that go along with it, but part of it as well would be living in a neighborhood and a community that has these other characteristics, such as safety. Some people live in communities where a 16 year old boy can’t walk to school without crossing three different gang territories and taking his life in his hands every day, which hardly seems like the American Dream to me. At this point safety becomes a huge issue that is outside of my individual perspective and connects me to my community. This is where the American rugged individualism kind of bumps up against a community focus. Often the American Dream is more of an individualistic pursuit. While people may implicitly include a desire for something good in the community, often there is less recognition of how that comes about or to what extent they should be involved in making that come about.

Val: As director of the Social Ecology general degree and given your connections to the Center on Inequality and Social Justice, how does the research and issues you raise in your report relate to the mission of the School of Social Ecology?

John: In this report, I documented trends in Orange County. When I start to analyze the information from a social ecological approach I feel less constrained because I take a more interdisciplinary focus. I can allow theories from other disciplines to be tested alongside theories from my sociology discipline. Of course, the challenge is I do not necessarily know much about these other disciplines and their theories. But what I find unique about the School of Social Ecology is it brings together academics from different disciplines to collaborate and learn from each other. It sparks new ways to think about things, which I think is extremely valuable.

Val: The School of Social Ecology has historically been described in various ways: “theory to practice”, “social problems inspired” or “relevant research.” Where and how does your work connect with these values?

John: I am trained as sociologist, many of whom have a horrible reputation of doing their academic study and stopping there. I will be right up front and say that I’m very much a neophyte when it comes to applying my research. But now Social Ecology has pushed me to think this way. I really welcome this growth as an academic.

Val: In 1983, Benedict Anderson published a book called Imagined Communities in which he argues that a nation is a socially constructed community. For him, an imagined community is different from an actual community. How do you imagine your community?

John: I find that argument fascinating. I study demographic trends, which are not imagined. But the concept of imagined relates to questions of what is my neighborhood exactly? How do we define a neighborhood? To what extent do people feel part of the community? These are important questions to answer when trying to solve community problems. Also, group norms are related to the imagined community. Norms affect someone’s sense of community. Often people say that their “neighborhood has changed”. They are referring to the norms that they imagined the community to have.

Val: What needs to be understood about communities of the future—real and imagined?

John: A lot of things still need to be understood about our communities. I view our communities as part of a larger system. It is often difficult to understand a community’s dynamic working parts. Therefore, it is necessary for scholars to look at a specific part of the community in order to execute their research. But I believe it is important to take the next step and examine how one part may affect the entire system. It is challenging, but moving beyond one view of the system can lead to better understanding. Our researchers in the School of Social Ecology are trying to do just this - understand the context and system, especially in relation to communities.

Val: Why do you put “statistics means never having to say you’re certain”—a clear reference to the classic line from the movie Love Story—as part of your signature line on email?

John: People who know me know that I do very quantitative work. I’m very much buried in the numbers. I think that there’s a certain power in numbers, but I learned early on that numbers can definitely be manipulated. Often, researchers want the numbers to represent the social world, but this can be tricky because it all depends on what and how you are counting something. It is important to use statistical analysis, but the approach taken can change the results. There is no perfect research design. We are always making decisions and there are always decisions that have pros and cons to them. But as long as you test your findings to confirm that they are robust, you can make conclusions about your research. I touch upon this idea in my recent are article in American Sociological Review.

Val: So what would people not know about you from reading your work?

John: I used to be a dice dealer in Las Vegas and for a period of time I tried making it as a song writer and musician.

Val: What else should we have asked you about? What’s the next puzzle to be solved?

John: It’s moving in this same direction, but taking aggregations to an even more extreme. For example, I am asking the question “What is a neighborhood?” Right now I am working on two projects that are trying to answer this question using two different methods. One defines it by just the physical environment. The other project relates to the “imagined community” we discussed earlier regarding perceptions, by defining it by the social ties between people. Next, I plan to move beyond these measurements and determine what the consequences are when defining a neighborhood on the overall community, such as segregation or lack of communication.