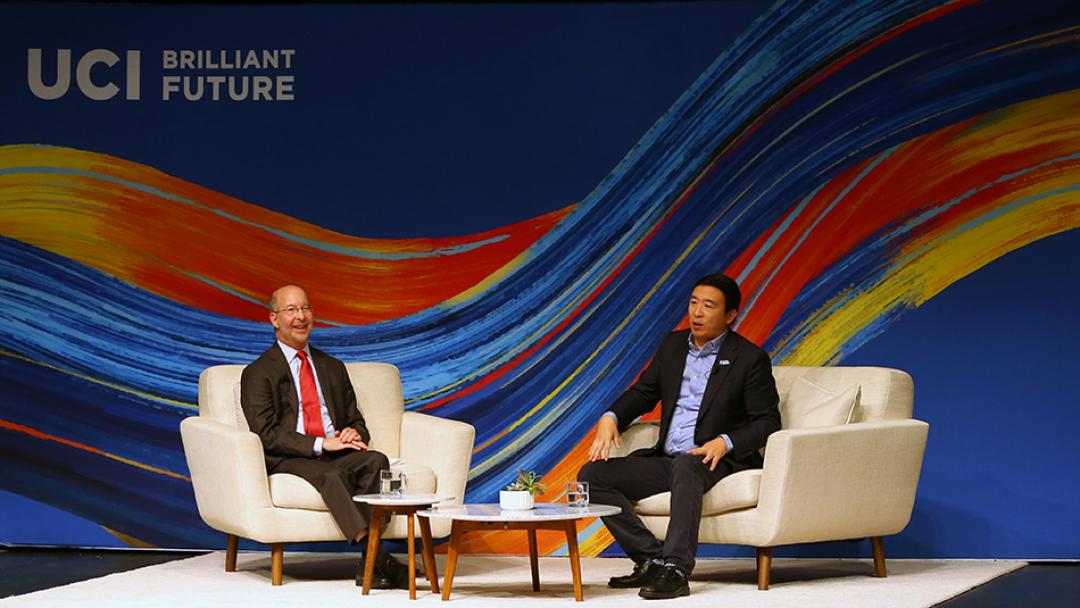 On a night when one of the most disruptive political figures in U.S. history was on the opposite coast announcing his third run for president, a very different political disruptor was on the Irvine Barclay Theatre stage calling for change.

Andrew Yang, the inaugural speaker in the School of Social Ecology’s Leading the Change Distinguished Speaker Series was himself disrupted twice, albeit briefly, during his appearance Nov. 15. More on that later.

A lawyer and entrepreneur who ran in the 2020 Democratic primary for president and the 2021 New York mayoral primary, Yang now co-chairs the independent Forward Party with Republican and former New Jersey Governor Christine Todd Whitman. He’s quite the draw, as UCI School of Social Ecology Dean Jon Gould, who hosted the event along with the school development office’s ChangeMakers arm, announced during a VIP reception preceding Yang’s appearance that the crowd of hundreds in the Barclay represented the largest Social Ecology gathering, other than graduations, since 2020.

Moments later, on the Barclay stage, Gould explained why Yang was an appropriate ChangeMakers speaker.

“Our school distinguishes itself in two very important ways,” the dean explained. “Number one, we don’t just study social problems, we also seek to solve them. And, we do so in an interdisciplinary way. We very much seek to connect with policymakers, practitioners, and community leaders. Our faculty and our students – our research and our teaching – are focused on being relevant. If there were a period in American history that calls for social and policy relevance, it would be hard to think of a time that’s more important than now. Between economic concerns, climate change and sustainability, election integrity, race relations, criminal justice, housing affordability, and many more challenges, our school seeks to lead the way forward.”

Yang has covered much of the same terrain since becoming a household name by calling for a universal basic income while on the presidential campaign trail, which, ironically, he joined because of Donald Trump’s 2020 reelection bid announcement. At the time, Yang referred to Trump as a “symptom” of the nation’s ills.

“And, now, with the creation of his Forward Party, Andrew has laid out the case for a variety of democratic reforms that can, as he says,’ unclog the pipes of our system, and realign the incentives of legislators with the wellbeing of the American people,’” Gould said before bringing out the man of the hour.

Yang began his half-hour, TED-like talk by saying the midterm elections, where Democrats exceeded expectations, “were a positive surprise for me,” but he went on to make the case that the country’s 50-50 split among the two major political parties is unhealthy, unsustainable and must be … what’s that word? … changed.

“We’re being set up by the biggest design flaw in the history of the world,” Yang said of a U.S. political system that Democrats and Republicans have rejiggered to ensure that only Democrats and Republicans remain in power – no matter how low approval ratings sink among Americans. Meaningful change can only happen when political opponents work together for the common good, but the way our system works these days, doing nothing (other than raising campaign funds) is the best way to stay in office, Yang explained.

“This is why, a number of years ago, I remember Marco Rubio stepping forward and proposing bipartisan immigration reform,” he said. “. . . What happened the following week? He said, ‘I was just kidding.’ What happened in those seven days? People who vote within his party said, ‘Marco, what are you doing? If you do this, we’re all going to take a beating. If you don’t do it, you can just play the other party and keep giving red meat and the country keeps going and we keep our jobs.’ So, Marco got his arms twisted pretty quick and said, ‘Hey, I was totally kidding about that entire bipartisan immigration reform thing.’ And so, you can advance to today and has anything happened on that issue? No.”

Insert any hot-button issue, Yang pointed out, and you get the same result “because you have a two-sided system now, where each side is actually more rewarded for staying in their corner and blaming the other side than actually having to bridge the gap and do anything.”

He said the solution to this “terrible, terrible design flaw” played out during the recent midterms in Alaska, where a first election with open primaries and ranked-choice voting led to the nationally known Sarah Palin losing a congressional election to relatively unknown Democrat Mary Peltola. The Forward Party is pushing for open primaries and ranked-choice voting across the country – despite a pushback by, you guessed it, Republican and Democratic party leaders.

Speaking of pushback, Social Ecology’s invited guest encountered some when two young men approached the front of the Barclay stage before one shouted, “Mr. Yang, on the topic of public education, 48,000 academic workers are currently on strike at the University of California. So, does the Forward Party endorse crossing picket lines to collect the speaking fee?”

Yang confessed to not being up on current UC labor negotiations, and some verbal jujutsu by Gould kept the unwelcome encounter brief. There was an even shorter interruption later in the evening, courtesy of a Bernie Sanders’ supporter. “Thank you for coming,” the dean said as the agitator ducked out of the theater.

“You’ve seen we value free-speech conversation,” Gould later said to Yang. “One of the other things that is somewhat related to that, in terms of our [university’s] emphasis, especially in the School of Social Ecology, is a focus on social goods and ecological sustainability.” Against that backdrop, Gould shared a student’s question wanting to know, whether “an economy where the accumulation of wealth and profit is … compatible with the flourishing science and technologies sector?”

Yang answered that societal progress in the U.S. should no longer be measured by economic indicators. “The example I use is that AI is going to be great for GDP, but it’s going to be very bad for call center workers and lots of other people. . . . I would argue we should just have a series of measurements around life expectancy and educational outcomes and environmental quality and mental health.”

Gasps greeted Gould’s event-capping revelation that Trump had just announced he would make a third run for the White House. That led to the dean inviting Yang to make his first public statement on Trump’s not-so surprising decision.

“Just the fact that this man successfully ran for president and may be the Republican nominee this time around,” Yang said, “just shows you how much our system needs an upgrade.”
— Matt Coker