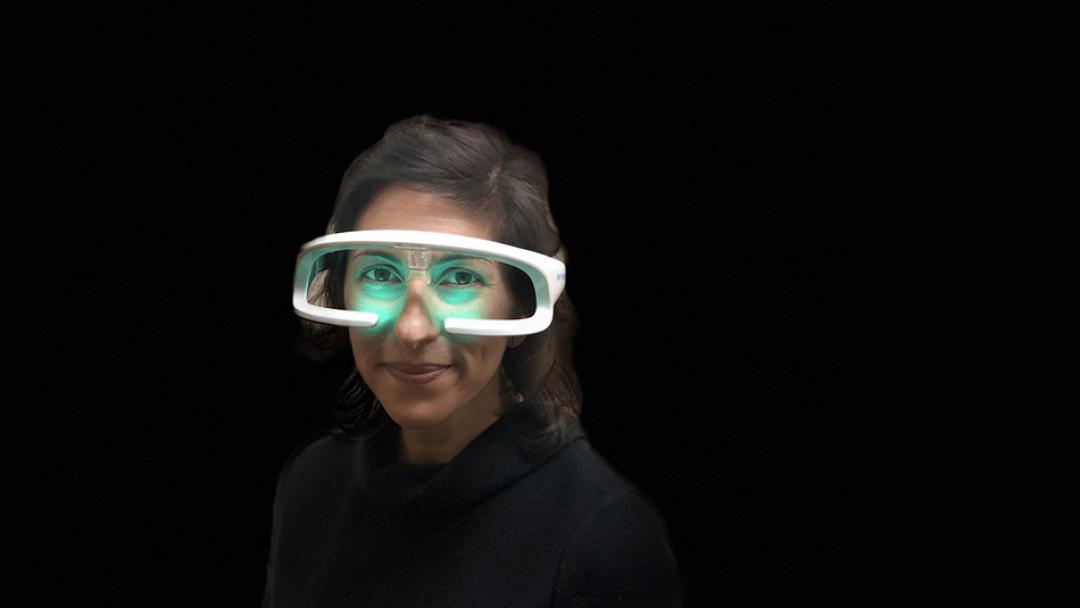 “This is one of the first studies to look at light therapy for people with PTSD symptoms,” Zalta said, adding that such therapy has been used to ease depression that occurs seasonally, jet lag and sleep disorders.

She said that her research collaborator, Helen Burgess, a professor of psychiatry at the University of Michigan, was using light therapy for low back pain in veterans when she found the veterans getting the treatment, who also suffered from PTSD, coincidentally experienced reduced symptoms of the disorder.

“That shocked me,” Zalta said. “So, we decided to do a placebo-controlled study of a wearable light device to see if it actually is something that might work for PTSD.”

Their trial consisted of 15 subjects who were instructed to wear the device that fits like a pair of eyeglasses but without lenses, outfitted with an LED light along the rim, for an hour just after waking up in the morning. The participants had experienced different traumas, including being physically or sexually assaulted, witnessing serious harm or death to others, having combat trauma or being a victim of a serious car accident. Nine participants got the therapy and six got a placebo version of the goggles.

Getting the light in the morning shifts people’s circadian rhythms earlier, Zalta explained. The glassless goggles, which are commercially available, are starting to replace the light box of the past because instead of sitting next to the light box without moving around, they can be worn while people go about their morning routines. The specific wavelength of light used is designed to match the peak circadian photoreceptors in the eye, which is therapeutic.

Its effectiveness has much to do with the time of day in which the light therapy is delivered. People with PTSD symptoms have what scientists call “an evening chronotype,” which means the body’s natural 24-hour circadian rhythm is shifted later in the day, resulting in sleep disturbances, Zalta said.

After the four-week trial, those who received the therapy, reported PTSD symptom improvements, Zalta, Burgess and fellow researchers documented in their recent research article, “A placebo-controlled pilot study of a wearable morning bright light treatment for probable PTSD,” in the journal Depression and Anxiety.

“We found that the people who received the treatment had a clinically meaningful improvement,” Zalta said about the trial results. “That means an important quality of life improvement, including better quality of their sleep and reduction in depression and other PTSD symptoms.”

She hopes to run the experiment on a larger scale. If it proves to be successful, it could make a significant impact.

“I see this as a potentially big deal,” Zalta said, adding that successful therapies for people with PTSD exist but they involve having to see a therapist and talking about their traumas and/or taking medications, most commonly antidepressants, that can cause unpleasant side effects.

“People don’t always know where to find psychotherapists, don’t want to or have time to visit one for an hour a week and don’t like the side effects from medications so they tend to avoid treatment or drop out of treatment before getting a sufficient dose,” Zalta said. “This light therapy is convenient. If it’s proven to be effective, it could be an alternative that could help more people with PTSD.”