Richard Alley, “Finding the Good News on Energy and Environment”

We get great benefits from the energy we use now mostly from fossil fuels, but the resulting pollution threatens to cause highly damaging climate changes.  Very strong evidence shows that if we use this knowledge wisely, we can build a larger economy in a cleaner environment with more jobs, improved health and a greater national security more consistent with the Golden Rule.  Today’s students belong to the first generation in human history with the confidence that they can build a sustainable energy system, providing the power we enjoy to everyone everywhere.

Richard Alley is the Carl F. Cranor Visiting Scholar of Phi Beta Kappa and Evan Pugh University Professor of Geosciences at Penn State. He studies the great ice sheets to help predict future changes in climate and sea level, including multiple trips to Antarctica, Greenland, Alaska, and elsewhere. He has been honored for research (including election to the US National Academy of Sciences and Foreign Membership in the Royal Society), teaching, and service. Dr. Alley participated in the UN Intergovernmental Panel on Climate Change (co-recipient of the 2007 Nobel Peace Prize), and has provided requested advice to numerous government officials in multiple administrations. He has authored or coauthored over 300 refereed scientific papers. He was presenter for the PBS TV miniseries on climate and energy Earth: The Operators’ Manual, and author of the book. His popular account of climate change and ice cores, The Two-Mile Time Machine, won the Phi Beta Kappa Award in Science. 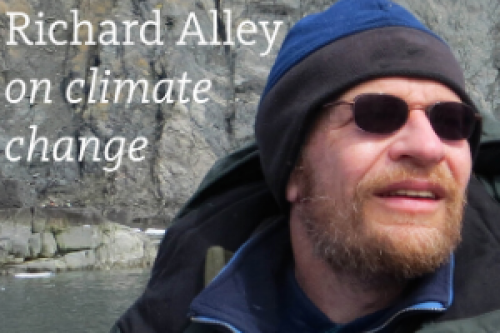